Despite its name, pork butt actually comes from the front of the hog. It’s an extremely flavorful cut that just needs a little bit of time in the kitchen to make it melt-in-your-mouth tender. 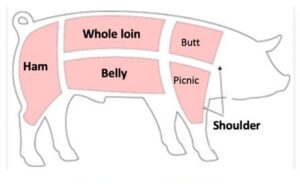 Where it comes from

The shoulder and upper front leg of a hog is known as the shoulder primal, and this is divided into two parts: the butt and the picnic. The butt is the top portion, consisting of the muscles surrounding the shoulder blade and the topmost portion of the arm. The picnic is immediately below the butt and consists of the rest of the front leg down to the hock. The butt is a big, rectangular piece of meat that is packaged either boneless or with some of the scapula (shoulder blade) attached.

What’s in a name?

There are two origin stories to explain why we now refer to a hog’s shoulder as a “butt” or “Boston butt.” The first theory is that the name stems from how the meat was stored for shipment. In the 1700s, long before the advent of modern refrigeration, colonial New England butchers often placed meat in wooden casks for transport via ship or wagon. These casks came in a range of standardized sizes, and the one supposedly most used for storing pork shoulder was known as a “butt.” And thus the name “pork butt” or “Boston butt” was born.

(Fun fact: Even though today the word “barrel” has become the generic term for any cylindrical storage container, that wasn’t always the case. Back in the 1700s, “barrel” was another standardized cask, one-fourth the size of a “butt.”)

But there are two big holes in this theory. For starters, the term “Boston butt” wasn’t actually used until the late 1800s. This was a time in American history when the expansion of railroads turned regional meatpacking into a national industry. Thanks to rail shipping, customers around the country were now exposed to city-specific differences in butchering. Many cut names we use today originated during this time, including “New York strip steak,” “St. Louis-style ribs,” and “Boston butt.” At the time, there were other geographically based names for particular versions of pork butt that eventually fell out of use, including “New York shoulder” and the misleading “California ham.”

The other problem with the “named for the container it was stored in” theory is the simple fact that there were tons of things shipped in butts. So why would the shoulder of a hog become the one and only thing named for the cask? The simpler and infinitely more likely explanation for the name is that “butt” simply refers to the larger, thicker end of something (for instance, a rifle butt). The cut we refer to as the butt is indeed the heftier end of the shoulder primal.

Today, butchers may refer to this cut of meat as “pork butt,” “Boston butt,” or simply “pork shoulder.”

What you get when you buy a whole hog

There are two shoulder primals on a pig (left and right), and each weighs about 12–18 pounds. The butt portion of the shoulder primal is about 6–9 pounds, while the picnic portion makes up the rest. When filling out your cut instructions, butchers will usually give you a choice of keeping the butt whole or splitting it into two roasts 3–4.5 pounds each. So, if you bought a whole hog, you’d get 12–18 pounds of butt, either as two large butt roasts or four smaller roasts. If you bought half a hog, you’d get one large butt roast or two smaller ones.

Many butchers, however, label both the butt and the picnic as simply “pork shoulder” and apply your cut instructions to both sections of the shoulder primal. So, if you bought a whole hog and chose the large roasts option, you’d end up with four 6–9-pound roasts labeled simply “pork shoulder” (two butts and two picnics). If you chose the small roasts option you’d end up with eight 3–4.5-pound roasts (four butts and four picnics). Divide those numbers in two if you ordered a half hog. 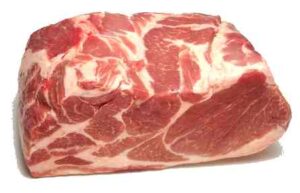 Since a pig’s shoulders get a lot of use, pork butt is a relatively tough cut of meat with lots of connective tissue. Properly cooked, however, it becomes fall-apart tender. It’s well-marbled, with plenty of intramuscular fat. Butchers usually leave the fat cap (the solid layer of fat on the outside of the meat) intact. The fat and the well exercised muscle fibers make pork butt extremely flavorful.

Because it has a fair amount of connective tissue, pork butt does best with “low and slow” cooking techniques that use moist heat. These include braising, stewing, and slow-roasting in the oven or crockpot (where steam builds up and adds moisture). Using a smoker is another great option. Cooking the roast for a long time at a low temperature allows the tightly-knit muscle fibers to “unwind,” which makes the meat pull-apart tender. Collagen in the connective tissue breaks down into gelatin, which adds to tenderness and protects the meat from drying out. Unlike the tapered, triangle-shaped picnic shoulder, the butt is a uniform rectangular shape that cooks evenly.

Pork butt should be cooked to 180° F to ensure that all the collagen has broken down and the roast has reached maximum tenderness. But there’s no need to dig out the meat thermometer — just grab a fork. If the meat pulls apart easily, it’s done. 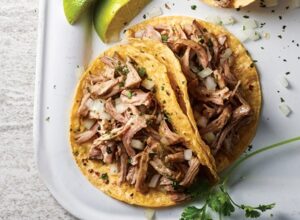 Pork butt is the cut of choice for pulled pork or carnitas. It’s also great cut up in a stew. (Tip: cook the roast whole and cut it into chunks afterward. The tender, cooked meat will be much easier to cube than the tough, raw meat.) If a recipe simply calls for “pork shoulder,” 9 times out of 10 they’re referring to pork butt. Even if a recipe specifically calls for a picnic roast, you can usually substitute in pork butt with good results.

My favorite pork butt dish is a Southern-inspired crockpot stew with pork, collard greens, and black-eyed peas from Kitchen Simmer. It’s packed with flavor and nutrition, fills you up without weighing you down, and is super easy. In case it’s not clear from the recipe, remove the roast once it’s done, cut/shred, and add it back to the slow cooker. If you’re feeling extra lazy (as I usually am), you can make it a true one-pot meal and skip browning the meat and blooming the spices on the stovetop. Honestly, I don’t taste a difference when I skip those steps — the stew still comes out phenomenal every time!

For more guidance on how to cook pasture-raised pork and other meats, including gauging doneness by temperature, color, and firmness, check out Appendix B of There’s a Cow in My Freezer.

From my freezer to your inbox

Sign up for the newsletter to stay in the know about the latest blog posts, community happenings, giveaways, and more. Served up monthly.